Why Use White Poinsettias in your Office Interiorscapes for The Holidays?

Why Use White Poinsettias in your Corporate Office Interiorscapes for The Holidays?
1. Why white poinsettias because they are different from the more traditional red flower and its’ cultivations and religious history. By using these white varieties you and your office can avoid any religious connotations , that may offend your colleagues at work.

2. Euphorbia pulcherrima, commonly known as poinsettia, is a species of flowering plant indigenous to Mexico and Central America. The name “poinsettia” is after Joel Roberts Poinsett, the first United States Minister to Mexico, who introduced the plant into the US in 1828. It is also called the Atatürk flower.

3. Christmas tradition
In Nahuat, the language of the Aztecs, the plant is called Cuitlaxochitl (from cuitlatl=residue, and xochitl=flower) meaning “flower that grows in residues or soil.” The Aztecs used the plant to produce red dye and as an antipyretic medication. Today it is known in Mexico and Guatemala as “Noche Buena”, meaning Christmas Eve. In Spain its is known as “Flor de Pascua”, meaning Easter Flower. In both Chile and Peru, the plant became known as “Crown of the Andes”.
The plant’s association with Christmas began in 16th century Mexico, where legend tells of a young girl who was too poor to provide a gift for the celebration of Jesus’ birthday. The tale goes that the child was inspired by an angel to gather weeds from the roadside and place them in front of the church altar. Crimson “blossoms” sprouted from the weeds and became beautiful poinsettias.
From the 17th century, Franciscan friars in Mexico included the plants in their Christmas celebrations. The star-shaped leaf pattern is said to symbolize the Star of Bethlehem, and the red color represents the blood sacrifice through the crucifixion of Jesus.

Poinsettias are popular Christmas decorations in homes, churches, offices, and elsewhere across North America. They are available in large numbers from grocery, drug, and hardware stores. In the United States, December 12 is National Poinsettia Day.

Big Spring, Texas is well known for its poinsettias as the “lighted poinsettia capital”. Poinsettia flowers inside the park, making Comanche Trail Park the Christmas Poinsettia capital an
American poinsettia monopoly
4. Until the 1990s, the Ecke family of Encinitas, California, had a virtual monopoly on poinsettias owing to a technological secret that made it difficult for others to compete. The Ecke family’s key to producing more desirable poinsettias was to create a fuller, more compact plant, by grafting two varieties of poinsettia together. A poinsettia left to grow on its own will naturally take an open, somewhat weedy look. The Eckes’ technique made it possible to get every seedling to branch, resulting in a bushier plant.
5. However, in the 1990s, a university researcher discovered the method and published it, opening the door for competitors to flourish, particularly in Latin America where the cost of labor is far lower. The Ecke family, now led by Paul Ecke III, no longer grows any on farms in the U.S., but as of 2008, they still control about 70% of the domestic market and 50% of the worldwide market.
Plantscape Designs Inc. uses both white and red poinsettias in our client holiday decorations within the N.E. plantscape business locations and Burlington, Ma indoor plantscapes.

At Plantscape Designs Inc., we are your interior landscaper for all your indoor office plant care, maintenance and design needs.

Plantscape Designs Inc. of Stoneham, MA services in many area cities and towns in Massachusetts: 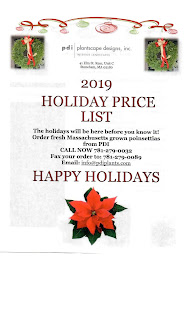