Why use Aspidistra Elatior “cast iron plant” in your indoor offices? 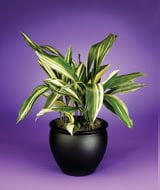 1. The Aspidistra Elatior is native to the Eastern Himalayas, Taiwan, China, and Japan commonly known as the “cast-iron plant” or “iron plant”. It is one of the few plants that we can say helped inspire or carry the lead in a novel.
2. In 1936, George Orwell wrote his novel “Keep the Aspidistra Flying”. It is an old-fashioned, tough-leathery foliage house plant. In fact, Aspidistra along with the Kentia palm long before we heard about a peace lily or Aglaonema was a favorite indoor plant during the Victorian era when houses were anything but bright and airy. Today, in the Southern United States you will find Aspidistra usually growing completely carefree as a groundcover in dense, dark shade.
3. Patience is the prime requirement needed by owners of small plants; it takes considerable time to grow an Aspidistra to specimen size. Ironically, like many “folk” plants, it is not always available in nurseries. This is partly because of its slow growth and not properly appreciated.
Cast-iron is usually grown in 6″, 8″; and 10″; azalea pots. As a bushy potted plant, 12 to 24 inches tall and wide, the Aspidistra simply has no equal and is a perfect plant for indoors. Aspidistra is an ideal plant for that cooler area of your house to bring the tropics indoors.
Aspidistra will also:
Tolerate dust as well as heat, cold, wet soil, drought, neglect and dimly lighted places.
Tolerate temperatures as low as 28 degrees without injury to the foliage.
Tolerate light levels as low as 10 foot candles
Make a great addition to cut flower arrangements; the foliage often lasts for weeks.
Generally Pest Free
4. Aspidistra elatior has cornlike, shiny, dark green leaves that grow to 24 inches long; it occasionally produces purple-brown small flowers near the base of the plant. It also has a variegated form. The white markings help to light up a dark corner rather like sun filtering through a shade tree.
5. A dwarf form called A. minor or Aspidistra “Milky Way” has white spotted black-green leaves. Try to acquire all 3, then display them in attractive pottery containers. Aspidistra is such a slow grower and is expensive to produce and purchase. But with all of its positive attributes it is well be worth the price, offering long-term enjoyment and beauty.
6. It gets its name Cast Iron from its ability to tolerate poor conditions both inside or out…Indoors Aglaonemas are possibly the only plants can handle these conditions indoors. Low light, drafts and general neglect in watering and dust accumulation. It is much more attractive with proper care and will tolerate a wide range of temperatures. It prefers temperatures between 50-55 degrees at night and 70-75 degrees during the day with light levels between 50 and 500-foot candles.
7. Evenly moist but not constantly wet is the ideal way to water this plant, although it will survive forgotten waterings. Outside, plant the Aspidistra in a good quality garden soil with decayed manure and up to 1/3 part peat or humus added. Indoors a good quality potting soil like those made for African Violets will work well. And last but not least, fertilize if required every three to four months in low light conditions with a half strength house plant fertilizer, and monthly at high light levels.
At Plantscape Designs Inc. we use these botanicals in our NE plantscape offices Boston, MA