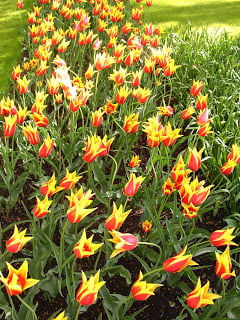 1. Like our “dot Com bubble”, “Real Estate bubble” and our latest “Banking and “Stocks Exchange” bubbles, the “Tulip bubble “of 1637 in Holland ( Tulipmania ) was our first meltdown of our Western World investment experience.
2. Even the price of the basic plain-Jane varieties rose, as lower income consumers entertained visions of endless worldwide demand centered on Dutch flower beds, a prospect that made the most rash spending of the moment seem like a wise investment, sure to yield future income.
3. And it was not only bulbs being sold for exorbitant prices; would-be growers were also leasing or buying farm property, for which they paid handsomely for the land. This culture-wide frenzy earned the nickname “tulipmania.”
4. Some scholars consider this one of the world’s first economic market bubbles – and bubbles, of course, all pop eventually. It is generally agreed that in February 1637, the prices dropped dramatically, with the rarest breeds falling to perhaps a tenth of their old prices.
5. Some scholars argue that this happened because the sellers got nervous – well aware how inflated the bidding had gotten, they started lowering their asking prices. Other historians suggest that the newly glutted market (consumers of very class now owned tulips, which they could breed) simply dictated that the bulbs were no longer precious, and prices had to be adjusted accordingly.
6. In either case, the result was the same chain of events: When sellers dropped prices for 1637 season, buyers who had already agreed to pay the 1636 prices felt cheated, and panic ensued. Nobody wanted to buy new tulips and everyone was sure the other side would cheat them on the deals they already had.
In many popular retellings of tulipomania, this price drop led to a crash akin to the later Great Depression in the U.S.
At Boston Plantscape Designs Inc we always use colorful varieties of tulips in our “LIving Arrangements” for our Boston cityscapes.