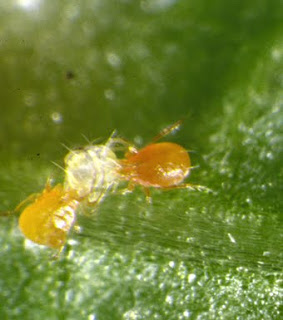 Phytoseiulus persimilis, orange critters, feeding on an immature two spotted spider.Plantscape Designs Inc uses biological controlls on your indoor office plants.
This predacious mite was accidentally introduced into Germany from Chili in 1958 (Dosse, 1958). From Germany, it was subsequently shipped to other parts of the world, including California (McMurtry et al., 1978) and Florida (Hamlen, 1980). These critters can keep your Boston plants healthy.
During the early 1960’s, research on this species was conducted in Great Britain, Holland, Canada, and the United States. Since these initial studies, the ability of this predator to control twospotted spider mites has been demonstrated on many plants, including cucumber (Gould, 1970, 1971), tomato (French et al., 1976), ornamental ivy (Gould and Light, 1971), rose (Simmonds, 1972; Boys and Burbutis, 1972), lima bean (Force, 1967), dahlia (Harris, 1971), strawberry (Laing and Huffaker, 1969), and dieffenbachia and schefflera (Hamlen and Linquist, 1981).
Although these studies were conducted under greenhouse conditions (or in growth chambers) , there is evidence that P. persimilis can be an effective natural enemy in commercial strawberry plantings (McMurtry et al., 1978) and on ornamentals in commercial interior plantings (Lindquist, 1981). Whether the effectiveness of this predator in these environments will be comparable to its performance under greenhouse conditions remains to be seen.
At PDIPlants we use these critters to eradicate pests like the twospotted mites that feed on your Boston office plants in the Boston, MA area.