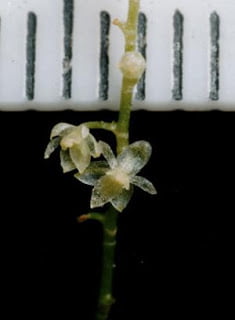 The smallest species of orchid in the world has been discovered hidden among the roots of a larger plant in a nature reserve in Ecuador.
Lou Jost, an American botanist, found the tiny orchid by accident when he was inspecting a plant collected from the Cerro Candelaria reserve in the eastern Andes, which was created by Ecuador’s EcoMinga Foundation in partnership with the World Land Trust in Britain.
The plant is just 2.1mm wide, and instantly supercedes the species Platystele jungermannioides as the world’s smallest orchid. The petals are so thin that they are just one cell thick and transparent.
The flower is just one of 60 new orchids and 10 other plant species that Dr Jost has discovered in the past decade. “I found it among the roots of another plant that I had collected, another small orchid which I took back to grow in my greenhouse to get it to flower,” he said of his latest discovery. “A few months later I saw that down among the roots was a tiny little plant that I realised was more interesting than the bigger orchid.
“Looking at the flower is often the best way to be able to identify which species of orchid you’ve got hold of – and can tell you whether you’re looking at an unknown species or not.”
Dr Jost, who works for the EcoMinga Foundation, is one of the world’s leading orchid hunters. “It’s an exciting feeling to find a new species. People think everything has been discovered but there’s much more,” he said
A second tiny orchid collected in the Rio Anzu Reserve in central Ecuador is among his other discoveries. “It was so small, it looked like a piece of dirt at first. I was going through the moss on a fallen tree branch – they’re good places for orchids to grow – when I spotted it. The flower was 3mm across,” he said.
Dave Roberts, of Royal Botanical Gardens Kew, said of the area where the flower was found: “That region of the world is where the majority of very, very small orchids live.”
More than 1,000 orchid species have been discovered in Ecuador in the past century, as plant collectors enjoy a bonanza made possible by the construction of roads which have allowed access to some of the most remote and unspoilt forest habitats in the world.
A group of 28 types of orchid which evolved in a mountainous area the size of London was perhaps the most exciting of Dr Jost’s recent finds. They are part of the Teagueia genus, which had previously been thought to be restricted to just six species. The evolution of the 28 closely related orchids in such a small patch of land was described as a botanical version of Darwin’s finches.
Plantscape Designs Inc. services the Boston, Ma corporate cityscape New England Plantscape community.