How to use Crypts in your interiorscapes Tewksbury, MA?? 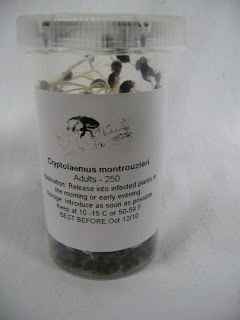 1. This beetle, Cryptolaemus montrouzieri, was imported into the United States in 1891 from Australia by one of the early biological control pioneers, Albert Koebele, to control citrus mealybug in California. Although C. montrouzieri initially devastated the citrus mealybug populations in citrus groves, it was unable to survive the winter except in coastal areas.
At PDI we use these critters to eradicate mealy bugs on your indoor green plants.
2. Appearance
Cryptolaemus montrouzieri is a small (about 3-4 mm long), dark brown lady beetle with a tan to orange head and posterior. The larvae grow up to 1.3 cm in length and have woolly appendages of wax (their true legs are barely visible underneath) which makes them resemble mealybugs, although they are about twice as large as the adult female citrus mealybug. C. montrouzieri eggs are yellow.
C. montrouzieri attacks citrus and closely related mealybugs and some soft scales, including hemispherical scale and its relatives. It is considered an important predator of citrus and long-tailed mealybug in greenhouses and interior plantscapes and is being introduced in a biocontrol program in the West Indies to control pink hibiscus mealybug.
3. Life Cycle
Adult females lay eggs among the cottony egg sack of adult female mealybugs. Eggs hatch into larvae in about 5 days at 27°C (80°F). The three larval stages last from 12-17 days during which the larvae feed on mealybug eggs, young crawlers, and the honeydew produced by mealybugs.
C. montrouzieri pupates in sheltered places on stems or on greenhouse structures. Adults emerge after 7-10 days and live four months. Four days after emerging, adult females begin to lay eggs, and the lifetime total may be as many as 400. Adults may live up to 2 months.
4. Relative Effectiveness
C. montrouzieri is a voracious feeder of mealybug in both the larval and adult stages – a single larva may consume up to 250 small mealybugs.
They are most effective when mealybug populations are high, and repeated releases may be necessary if mealybug populations are low. They require cottony egg masses for egg-laying (long-tailed mealybugs do not have cottony egg masses). Although adults and young larvae prefer to feed on mealybug eggs, older larvae will attack any mealybug stage. Adults can fly and cover large areas to search for food. If mealybugs are scarce, they will fly off in search of other related insects, e.g. aphids and soft scales, although reproduction is substantially greater on mealybugs.
5. Conservation
It is important to remember that C. montrouzieri superficially resembles its prey, the mealybug. This can cause problems if large numbers of larvae are present on crops that are ready to be shipped or in indoor situations (such as malls) where the public may be unaware of the benefits of natural enemies.
Plantscape Designs Inc applies these predators on all mealybugs on your indoor office plants in Boston, MA.

Plantscape Designs, Inc. has serviced numerous corporations in the past ten years in the town of Tewksbury MA. These long-standing clients included the Holiday Inn and high tech companies such as Thrive Networks, CompuCom, Starrent, and Ciber corporation (who was bought out by Oracle, a current client).

We used many indoor green tropical plants in their interior landscaping designs to both beautify and clean their office air of carcinogens.

Just some of the services Plantscape Designs Inc Provides:

9.  Tewksbury, MA Sale and Maintenance of tropical plant and flowers for your offices greenliving

10  Tewksbury , MA Care and design of your interior office greenery

It’s Not Always About Flowers With Interior Office Plant Design 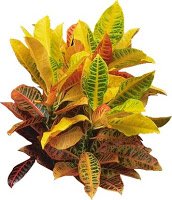 When we think of adding a colorful accent to our indoor office plants we often think about cut flowers or a flowering potted plant. Actually there is another option. Tropical foliage plants that have beautiful colored leaves. If your office has the right conditions, bright light and warm temperature, there is an unlimited selection of plants that have colorful foliage and variegated leaves. Crotons, Cordyline, Rex begonias, Stromanthe are just a few that can brighten your office with some color. We use many of these on locations in the Boston metro area. Colored leafy botanicals have unlimited plant possibilities.